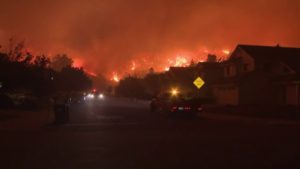 A couple of weeks ago, my sister had to evacuate her home. At 2 in the morning.  The Woolsey Fire had jumped the 101 right down the street from her family’s home, and it was time to get out. I’m happy to say that in the end, after 5 days of evacuation, they and their home were just fine. But there were a lot of emergency preparedness lessons learned during this time that are worthy of sharing.

When they realized they had to leave at 2 am, my sister’s family knew they had to have a plan. They were evacuating 4 adults (ages 20 to 91,) in three cars. Cell phones weren’t working so they couldn’t solidify their destination until they were on the road. They all had to know where they were heading.  They agreed on a friend’s house, about 25 miles away. You know that friend, everyone has one, the person you can actually call at 2 am and they will be there for you. Once cell service returned, my sister called that friend (note, she called her on her landline, knowing she’d for sure answer that line and not have it on do not disturb,) and their plan was set.  All 4 of them arrived safely and were together.

Know What to Take

When I spoke to my sister later that morning, we talked about what they had each taken from their home.  My sister had just come back from a business trip, so had a still packed suitcase full of clothes. Beyond that, she took jewelry and some family mementos that were at hand.  My 20 year old nephew took his vinyl collection and his computer system. Priorities.

My sister was a bit dismayed that she hadn’t known what to take when the moment came, and also knew that she had to take some steps to remedy that. We learned that some people had “evacuation bags” already packed. At my house, we have safety backpacks packed for the two humans and one dog - we live in earthquake country after all, and emergency preparedness is on our radar. But no one truly expects to have to run out of their house at two in the morning.

So what do you take? During the calmer moments of life, it’s worth taking 10-15 minutes to give that some thought. Make a list of the items that are most meaningful to you that you want to be sure to grab (and note where they are so you aren’t frantically searching in a time of crisis). Consolidate your most important documents into a single place. One thought is to put them in a dry bag or fire proof box, something you can just grab and run 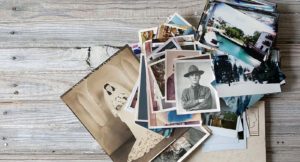 Pictures are always the toughest - they are amazing memories of our lives. My sister has a huge collection of family pictures and knew she couldn’t grab them all. Once she was out and her family was safe, she immediately started looking into photo scanning services. For photos that are  pre-digital, get them scanned and store them somewhere safe. That way, you don’t have to worry about grabbing the prints, you know you have the images. She and I will be doing this for sure with all the photos from our parents and grandparents.

Our family has long had a group chat set up. This became especially helpful when my niece moved to the East Coast. When I woke up that Friday morning, even though my phone had been on do not disturb, I had a trail of text messages that filled me in on what was happening. When cell service had returned, my sister had texted to let my niece and I know what was happening. There were messages announcing their arrival at their destination, clarification that everyone was fine and updates as to what was going on.

As the day went on, we were all watching the local news (thank you KTLA streaming for great coverage,) and talking about what was happening and what the “next step” plans were. By all of us being in communication together, it provided comfort and reassurance, and also eliminated the need to contact different people individually.

Get the Inside Info

One of the hardest things about being evacuated is that you just don’t know what’s going on. My sister spent days wondering if their house was still standing. While the news was helpful for the big picture, they really wanted to know what was happening on their street. 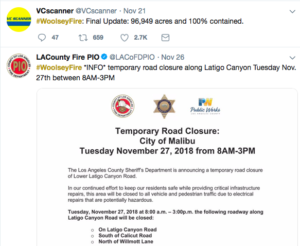 Through the power of modern technology, they were able to get some pretty specific information. There were a number of Twitter feeds covering the emergency scanners and sharing updates on every call.  This way, residents knew where flare ups were.  Often times people would comment on the scanner feeds with even more information. And everyone was appreciative of the information sharing the scanner followers provided.

There were also some intrepid neighbors who chose to stay and fight for the neighborhood. Clearly these folks are more hard core than most. While I wouldn’t recommend it, they definitely did a service to their neighbors. Beyond just fighting things in the neighborhood (either with their own hoses or notifying firefighters of flare ups,) they were able to provide a LOT of information.

There was a Facebook group for their neighborhood that these folks were sharing updates to as often as possible. This provided information on the  locations of flare ups and responses. People would ask about their own homes, and those on the inside would report if they could. It was an incredible gathering of the neighbors and an amazing example of support. It also brought a ton of peace of mind to a lot of folks.

My sister’s neighborhood was the very last in Agoura Hills to be allowed back into their homes.  It was exhausting and frustrating but, ultimately, filled with relief when they all returned and nearly every home was in tact. But then came the reality of living in a post-disaster zone.

My sister came up with a few “to do” items that hadn’t been on her list before.  Call the insurance company and get flood insurance. After watching the flooding and mudslides in Montecito last year, she wants to be prepared for what might come their way in the aftermath of the Woolsey Fire. She had friends lose their home and almost die in those mudslides so knows the reality of what it can bring.

Also on her list is to call an arborist.  While none of her trees were damaged, she’s now looking at them in a different light - what damage could they do to her home? Some are leaning, while others are just hanging over the house. Whether it’s from fire or wind or just age, any of these could cause problems, so she’s on top of that now.

All told, my sister and her family were extremely lucky.  They see their home and their community in a new light, and are more grateful than ever (we had a lot to celebrate this Thanksgiving). In the midst of all of this chaos, a lot of good things were learned and can be shared, helping everyone to prepare what may (but hopefully will never,) come their way.

IMPORTANT NOTE: I have not and will not verify or investigate the information supplied by third parties.